6 Myths About Stepmoms (And One Truth)

Myths about stepmoms abound. And they’re usually not super flattering. Cinderella got her prince, but her story didn’t do stepmothers any favors! Hence the nicknames. Stepmonster. Wicked stepmother. Evil stepmother. You get the gist.

I’m guessing most people have some sort of preconceived notion about stepmothers, even if subconscious. And even if they don’t want to admit it.

So I’m going to do my part and try to debunk some of these stereotypes and myths about stepmoms. And lay down one truth that I hope you’ll keep in mind.

Okay, I know this should be a no brainer. It’s is a stereotype left over from fairy tales, but sadly it lingers.

When I heard from my stepkids that I had been called the “stepmonster”  it really stung. I know I do a darn good job at stepmomming. I love my stepchildren with my whole heart and am there for them unconditionally. And to have that denigrated and reduced to one nasty word hurt.

Stepmoms are no more or less wicked than any other parent trying to do their best. Actually, I’ll go out on a limb here and say they might even be less wicked because they’re doing much of the same parenting work as biological parents, but for less than or no credit. And many times all of the blame. 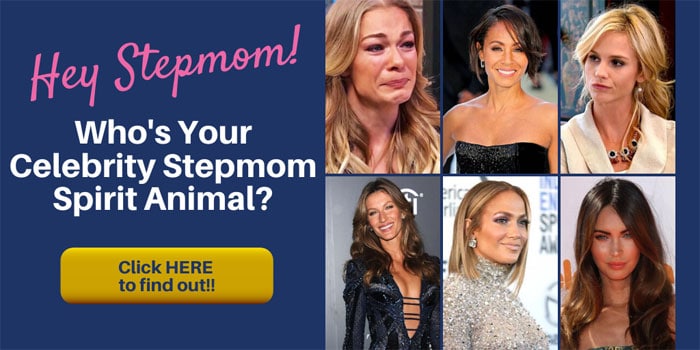 Sure, there are probably stepmoms out there who may have been the “other woman” that helped break up the marriage of the man they’re now married to. But that’s simply not the majority of us.

I’ve been accused of contributing to my husband’s divorce. And I’ve had to correct the record. It’s simply not chronologically possible. And yet, I have had to defend myself against the accusation. And many other stepmoms out there have had to do the same thing.

There’s no single formula for a divorce. Each has its own factors and complications. And likely a host of issues that led to the split. And when children are involved, it can be even messier.

Stepmoms should not be blamed by association or assumption.

I can assure you, stepmoms don’t want to replace mom. We have so much love to give, but we always know we did not give birth to these kids. We want the kids to have a great relationship with mom and dad. But we want the chance to love and care for them in our role, too.

The quote below says it well (and you can check out this post for more on-point stepmom quotes). There is plenty of love to go around without us trying to replace anyone. 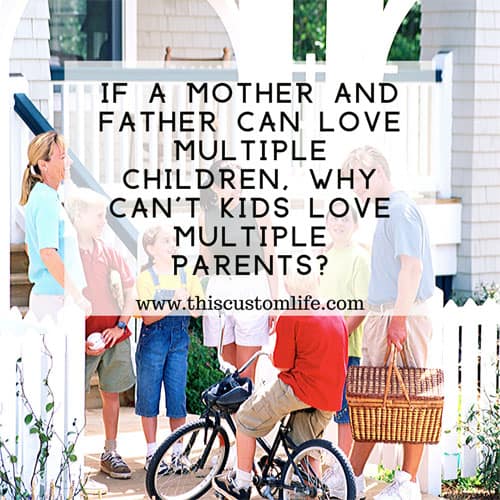 There are some stepmoms out there, I am sure, who don’t want kids. But I’d venture to say that if a woman doesn’t want kids, she’s not going to marry a man with kids.

I definitely wanted kids. I waited until my early 40s to get married, so I wasn’t sure what form kids would come in. Would I be able to conceive? Should I think about adoption? Would I stepparent? That question was answered when I met Craig and his four kids.

It’s not always been the smoothest road, for sure. But I’m so thankful these children are part of my life. As much as I know I’ve done for them as a parent, they’ve given me just as much. I simply can’t imagine my life without them.

Myth #5: They don’t want to be involved.

Again, if a woman is marrying a man with kids, chances are she is probably excited about getting to know them and participating in their lives. Can I leave it at that?

But seriously, most stepmoms want to be involved. They may be nervous about what that should look like. Or hesitant about stepping on anyone’s toes. But they want to be present. They want to develop relationships with the kids. Attend sporting events, school meetings, doctor’s appointments.

Remember when I said every divorce is different? So is every stepparenting relationship. Some stepmoms go to every appointment and every event. Some keep their distance. It’s okay either way because every circumstance is unique. But most stepmoms want to be involved in some way.

Myth #6: They want to be too involved.

This is the flip side of the coin. The myth that stepmom is going to try to show mom up at every event. See #3. I want to reinforce that no one is trying to replace mom. Or show her up.

Going to sporting and other events can be super awkward as a stepmom. We’re never sure what people are thinking about us. Or what has been said about us or how we’ve been described. We feel insecure about our place. And to make matters worse, at school meetings and doctor’s appointments, it’s not uncommon for the doctor or teacher to totally ignore us when a biological parent is present.

Trust me when I say – showing anyone up is not on our radar. We’re just trying to do the right thing. Sometimes we are just trying to get through the event. But mainly we’re trying to be there for our family and do right by our stepchildren and our spouse.

The Truth? We didn’t know what we were getting into. But we’re here for it all.

During one unfortunate and particularly ugly incident between my husband and his ex, his ex’s mother sneered at me that I knew what I was getting into when I got involved with him. Nothing could be further from the truth.

Stepmoms know they’re marrying the man they love and that his children are part of the package. I knew that for sure. And was excited about it.

But they don’t know that when people talk about the “honeymoon phase” of being a newlywed it doesn’t really apply to them. Because even if they get a honeymoon, it might be interrupted by emails or calls about the kids. And then they come home and immediately dive into an already existing family life and routine. There’s no spending months of lazy Saturday mornings and getting used to living together. No, instead there is carpool, sporting events, doctor’s appointments, you name it.

They also don’t know how big of a part his ex-wife will play in their lives. Or her family and all the dynamics that come along with that. They don’t anticipate that the ex-wife’s calendar will control theirs much of the time. Or that there are some very real issues that crop up with kids processing their parents’ divorce, especially if it’s high-conflict. 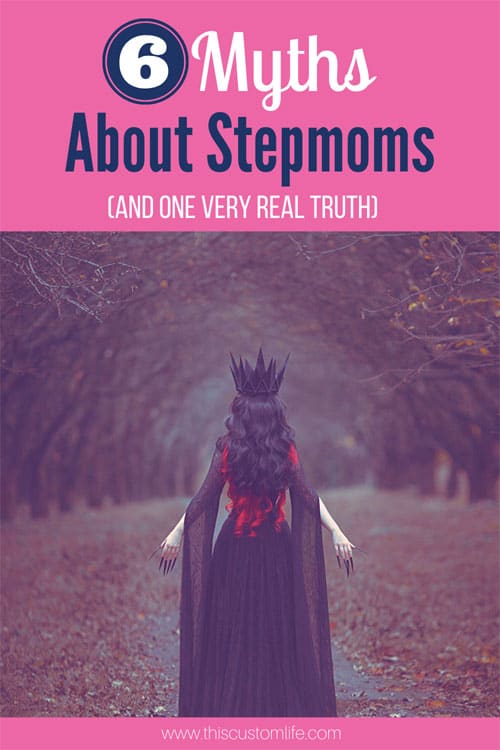 And We Hope Our Loved Ones Are Here For Us.

I hope we can try to put these myths about stepmoms to rest. Can we instead acknowledge the enormous responsibility she has taken on completely willingly? It’s a huge burden. But also a joyous set of circumstances. With tremendous love. And stepmoms are making every last effort, every single day, to be the best dang bonus mom they can be.

No stepmom is perfect. Heck, no parent is perfect, right? But no stepmom is all bad. So can we agree that these myths about stepmoms need to be snuffed out?

Instead, friends and family . . . be there for her. Listen to her. Give her the benefit of the doubt. And if you come across a stepmom at a school or sporting event, just give her a nice smile and make her feel welcome. I can promise you she’ll appreciate it.

For all the stepmamas out there, my goal is to help you get a handle on stepparenting. It’s tough and full of challenges. And more than a few stereotypes. But it’s also one of the most rewarding roles you’ll ever fill.

I want to offer you the support, guidance, and opportunities so that you can be the best stepmom you can be. Have you joined our tribe yet? If not, click here to be a part of our blended family community! 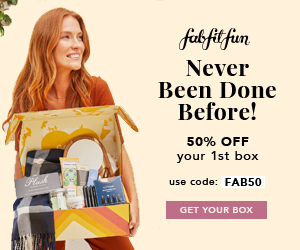